There are various newspaper records of epic hurling battles on some of the most famous greens of London in the 18th and 19th century, some 150 years before London’s affiliation to the GAA.

In 2014, one such article garnered huge attention from modern-day GAA commentators, when a report surfaced of a 21-on-21 game of hurling was played between Ireland… and Russia! 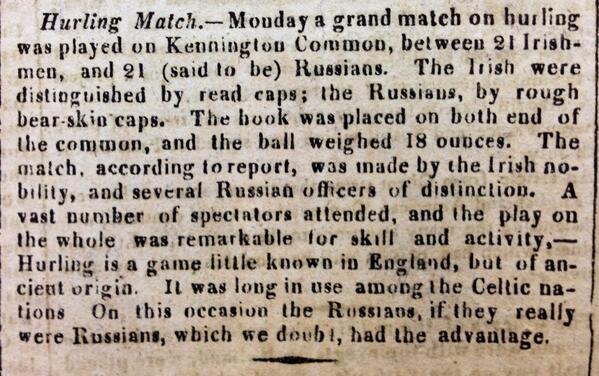 An 1814 edition of the Limerick Gazette surfaced (above), detailing a contest between a red-cap wearing Irish team and Russian players, who adorned ‘rough bear-skin caps’.

The game was noted to have been arranged by the Irish nobility, and ‘several Russian officers of distinction’, and was likely to have been played mostly on the ground due to the description of an 18-ounce ball.

The author’s scepticism over the nationality of the ‘Russians’ is clear, but nevertheless the event generated enough attention to attract a sizeable crowd to Kennington Common.

Further reports of that era show that Kennington Common (famed for being the home of The Oval cricket ground), along with Alexander Palace, Clapham Common, Hyde Park and the Artillery Grounds.

In fact, these events were so attractive to spectators that they would be advertised in newspapers, which means that there is prominent evidence of games in the city long before our affiliation of 1896. There are reports of 10-20,000 people in attendance at some of the games, capturing the imagination of both the Irish community in the city, but also the more noble classes who would organise such games to place a ‘wager’ on.

The adverts were often sponsored by local pub landlords looking to cash in on the crowds by offering a base for pre- and post-match beverages, therefore insinuating quite commercialised events. Hurling seemed to be mirroring the growing popularity of cricket of which the two sports shared common venues.

A 1747 advert for a Munster v Leinster match in Finsbury’s Artillery Grounds shows that the growing numbers of Irish people moving to the capital would represent the team that reflected their place of birth. It is one of many adverts for such games in the 1700s.

Due to the constant ‘conveyer-belt’ of migration from Ireland to here, it is widely accepted that those moving over would have a strong influence on the standard of hurling played in London and it would have been reflective of the rules followed back at home.

A crowded Kennington Common in 1848

As noted by Kinsella and Bergin, the descriptions of games at the time do not divulge much information on any of the players, or their occupations. They are described as ‘gentlemen’ but it is difficult to tell if it was an exclusive term to collectively recruit players, or if it meant that the games were ‘socially exclusive’.

By the time that we move into the 19th century, adverts seem to have made a distinction between the participants of double headers, stating that cricket games were to be played by gentlemen, where the hurling game would be contested by ‘Irishmen resident in the neighbourhood of the metropolis’.

By 1875 a hurling club of sorts was started in Southwark, which was attached to St Georges Catholic Cathedral. With an absence of a club grounds they organised puck abouts on Clapham Common, which when witnessed by the large Irish community present there at the time seemed to snowball their membership size. This is reiterated by evidence of a 25,000-strong crowd attending a St Patrick’s Day festival in London at that time.

Due to political tensions at the time, and the suspicions of policeman signing up to hurl at the time, the Southwark team suffered greatly, and along with other intermittent moves to set up clubs in London at that time, nothing became permanent.

But by 1895, there are much more organised efforts recorded. Hibernian Athletic Club (London’s first GAA club) was founded, and a 21-a-side game between Light Green (north London) and Dark Green (south London) was a hit with some members of the community who had not seen a game of hurling since they left Ireland many decades before, apart from the very few who had attended the very sporadic intermittent games at Alexandra Palace or Clapham Common.

Later that year a further two clubs were formed; the Exiles of Erin and the Sons of Erin. The 1895 Central Council meeting records show the enthusiasm those in Ireland had for the efforts of the gaels here in London.

“We view with satisfaction the fact that the GAA has at last taken firm root in Great Britain. That we congratulate the members of the South London Athletic Club and the Islington Hibernians Club on being the pioneers of the movement.. and we wish the above mentioned clubs every success and promise them all the support in our power in their efforts to spread the GAA amongst our fellow-countrymen in Great Britain.”

And with that the foundation was set for London to affiliate to the GAA the following year.